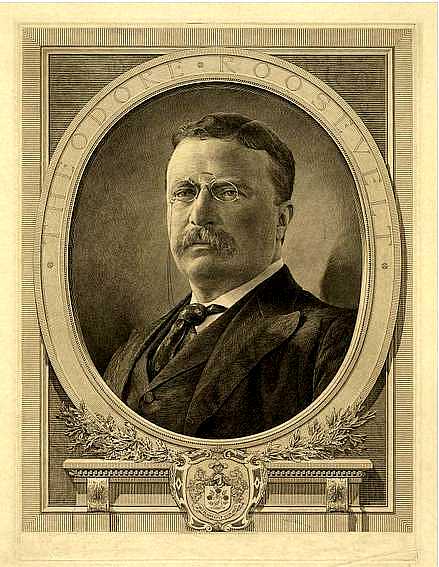 "My father was the best man I ever knew. My mother was a sweet, gracious, beautiful Southern woman, a delightful companion and beloved by everybody."

"The teaching which I received was genuinely democratic in one way. It was not so democratic in another. I grew into manhood thoroughly imbued with the feeling that a man must be respected for what he made of himself. But I had also, consciously or unconsciously, been taught that socially and industrially pretty much the whole duty of man lay in thus making the best of himself; that he should be honest in his dealings with others and charitable in the old-fashioned way to the unfortunate; but that it was no part of his business to join with others in trying to make things better for the many by curbing the abnormal and excessive development of individualism in a few."

1883 - September. Establishes himself as a ranchman in western Dakota.

1884,  February 14 - Death of his mother and his wife.
"It was a grim and an evil fate, but I have never believed it did any good to flinch or yield for any blow, nor does it lighten the blow to cease from working." (Private letter, March 1884.)

1884, April - As Chairman of the Committee on Cities, presents report which results in vital changes in the charter of New York City.

"It was still the Wild West in those days, the Far West, the West of Owen Wister's stories and Frederic Remington's drawings, the soldier and the cowpuncher. That land of the West has gone now, 'gone, gone with lost Atlantis,' gone to the isle of ghosts and of strange dead memories. ... In that land we led a hardy life. Ours was the glory of work and the joy of living."

1885 - Publishes Hunting Trips of a Ranchman.

1886, November - Candidate for Mayor of New York. Defeated by Abram S. Hewitt.
"But anyway, I had a bully time."

"The opposition to the reform is generally well led by   skilled parliamentarians, and they fight with the vindictiveness natural to men who see a chance of striking at the institution which has baffled their ferocious   greed. These men have a gift at office-mongering, just  as other men have a peculiar knack in picking pockets;   and they are joined by all the honest dull men, who vote   wrong out of pure ignorance, and by a very few sincere and intelligent, but wholly misguided people."

1895-1897 - President of the Police Commission of the City of New York.
"There is nothing of the purple in it. It is as grimy as all work for municipal reform over here must be for some decades to come; and it is inconceivably arduous, disheartening, and irritating, beyond almost all other work of the kind. ... It is not work to be done on a rosewater basis."

1898 May - Resigns as Assistant Secretary to become Lieutenant-Colonel of the First U. S. Volunteer Cavalry. the Rough Riders.
"A man's usefulness depends upon his living up to his ideals in so far as he can. Now, I have consistently reached what our opponents are pleased to call 'Jingo Doctrines' for a good many years. One of the commonest taunts directed at men like myself is that we are armchair and parlor Jingoes who wish to see others do what we only advocate doing. I care very little for such a taunt, except as it affects my usefulness, but I cannot afford to disregard the fact that my power for good, whatever it may be, would be gone if I didn't  try to live up to the doctrines I have to preach."

July 1 - Battle of San Juan Hill.
"As for the political effect of my actions — in the first Place, I never can get on in politics, and in the second, would rather have led that charge and earned my colonelcy than served three terms in the United States Senate. It makes me feel as though I could now leave something to my children which will serve as an apology for my having existed." 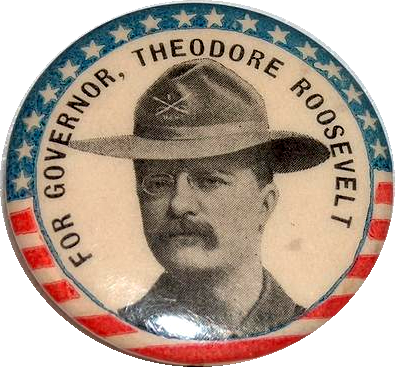 1898, November 8 -  Elected Governor of New York.
"At that time boss rule was at its very zenith. . . . In each case I did my best to persuade Mr. Platt not to oppose me. ... It was only after I had exhausted all the resources of my patience that I would finally, if he still proved obstinate, tell him that I intended to make the fight anyhow."

1900, June 11 - Nominated for Vice-President by the  Republican Party.
"If I have been put on the shelf, my enemies will find,   that I can make it a cheerful place or abode." 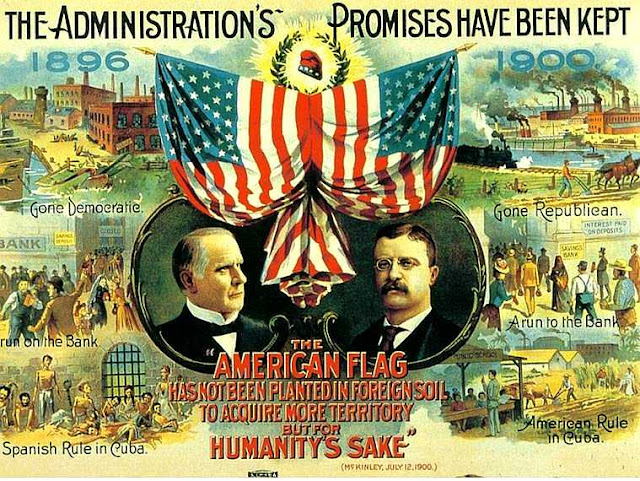 1901, September 14 - President McKinley dies as the result of an assassin's bullet; Roosevelt becomes twenty-sixth President of the United States.
"The course I followed, of regarding the Executive as subject only to the people, and, under the Constitution, bound to serve the people affirmatively in cases where the Constitution does not explicitly forbid him to render the service, was substantially the course followed by both Andrew Jackson and Abraham Lincoln."

1901, October 15 - Roosevelt settles the coal strike.
"May Heaven preserve me from ever again dealing with so wooden-headed a set as these coal-operators, when I wish to preserve their interests!" ... "I shall never forget the mixture of relief and amusement I felt when I thoroughly grasped the fact that while they would heroically submit to anarchy rather than have Tweedledum, yet if I would call it Tweedledee, they would accept it with rapture; it gave me an illuminating glimpse into one corner of the mighty brains of these 'captains of industry.'"

1901, December 31- Roosevelt settles the Venezuela affair.
"I told John Hay that I would now see the German Ambassador, Herr von Holleben, myself, and that I intended to bring matters to an early conclusion. Our navy was in very efficient condition." 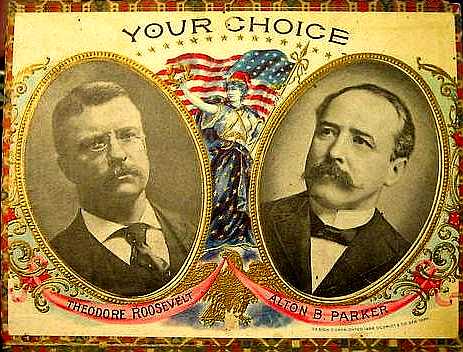 1904, November 8 - Elected President over Alton B. Parker, the Democratic nominee.
"I am glad to be President in my own right."

1905, September 5 - Signing of Russo-Japanese Treaty.
"It is enough to give anyone a sense of sardonic amusement to see the way in which the people generally,   not only in my own country but elsewhere, gauge the work purely by the fact that it succeeded. If I had not brought about peace I should have been laughed at and  condemned. Now I am over-praised."

1909, February 11- Return of the fleet.
"In my own judgment the most important service that I rendered to peace was the voyage of the battle-fleet round the world."

1909, March 4 - Roosevelt retires from the Presidency, being succeeded by William Howard Taft,

1909-1910 - Hunting in Central Africa.
"There are no words that can tell the hidden spirit of the wilderness that can reveal its mystery, its melancholy, and its charm. There is delight in the hardy life of the open, in long rides, rifle in hand, in the thrill of the fight with dangerous game. Apart from this, yet mingled with it, is the strong attraction of the silent places, of the large tropic moons, and the splendor of the new stars; where the wanderer sees the awful glory of sunrise and sunset in the wide waste spaces of the earth, unworn of man, and changed only by the slow change of the ages through time everlasting."

1910, May 31- Address at the Guildhall, London.
"Either you have the right to be in Egypt or you have not, either it is or it is not your duty to establish and keep order. . . . Some nation must govern Egypt. I hope and believe that you will decide that it is your duty to be that nation." 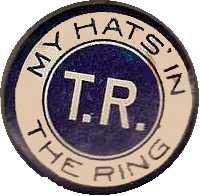 1912, February 15 - Announces candidacy for the Republican nomination for President.
"My hat is in the ring."

1912, August 7 - Nominated for President by the Progressive Party.
"This country will not be a good place for any of us to   live in if it is not a reasonably good place for all of us   to live in." . . . "Laws are enacted for the benefit of the whole people, and cannot and must not be  construed as permitting discrimination against some of   the people."

1912, October 14 - Shot at Milwaukee.
"I did not care a rap for being shot. It is a trade risk, which every prominent public man ought to accept as a matter of course."

1913 - Publishes Theodore Roosevelt — an Autobiography. Publishes History as Literature and Other Essays.

1915, January 1 - Publishes America and the World War.
"The kind of 'neutrality' which seeks to preserve 'peace'   by timidly refusing to live up to our plighted word   and to denounce and take action against such wrong   as that committed in the case of Belgium, is unworthy   of an honorable and powerful people. Dante reserved   a special place of infamy in the Inferno for those base   angels who dared side neither with evil nor with good.   Peace is ardently to be desired, but only as the handmaid   of righteousness. The only peace of permanent value   is the peace of righteousness. There can be no such   peace until well-behaved, highly civilized small nations   are protected from oppression and subjugation."

1915, May - Libel-suit, William Barnes vs. Theodore Roosevelt; decided in favor of Roosevelt.

1916 - Publishes A Booklover's Holidays in the Open. Publishes Fear God and Take Your Own Part.

1917, February - Requests permission of President Wilson to raise and equip a division of volunteers for service in France.
"Peace is not the end. Righteousness is the end." . . . "If I must choose between righteousness and peace I choose righteousness."

1917 - Publishes The Foes of Our Own Household.

1918, July - Death of Quentin Roosevelt in France. Roosevelt refuses Republican nomination for Governor of New York. Publishes The Great Adventure.
"Our present business is to fight, and to continue fighting until Germany is brought to her knees. Our next business will be to help guarantee the peace of justice for the world at large, and to set in order the affairs of our own household.'

The Congressional Evolution of the United States of America

Presidents of the United States of America

Capitals of the United Colonies and States of America

Book a primary source exhibit and a professional speaker for your next event by contacting Historic.us today. Our Clients include many Fortune 500 companies, associations, non-profits, colleges, universities, national conventions, PR and advertising agencies. As a leading national exhibitor of primary sources, many of our clients have benefited from our historic displays that are designed to entertain and educate your target audience. Contact us to learn how you can join our "roster" of satisfied clientele today!

Primary Source exhibits are available for display in your community. The costs range from $1,000 to $35,000 depending on length of time on loan and the rarity of artifacts chosen.

No Taxation Without Representation

US Bill of Rights

*Republican Party - - is a defunct political party organized by Thomas Jefferson and James Madison in 1791. The Party went out of existence over the schism between John Quincy Adams and Andrew Jackson (both Republican candidates) over the Presidential election of 1824. Today, for the sake of expediency, political scientists incorrectly refer to it as the Democratic-Republican Party. Party members throughout its existence never utilized the name “Democratic-Republican.”

*** President of the Confederate States of America